By The Numbers Part II: DMA Analysis Confirms SDSU’s Worth

Last week we looked at how San Diego State lined up in the PAC-12, Big 12, and Mountain West conference metro area populations. This week we look at TV households but instead of focusing too much on SDSU we’re going to look at how badly the Pac-12 was hurt by the defections of USC and UCLA and whether or not it makes sense to add SDSU.

There’s been a recent post on Twitter by Jeffrey Fuller claiming the Pac-12 is going to take a 45% haircut on their next TV contract due to USC and UCLA leaving. He essentially takes a valuation by Navigation Research and reduces the payouts by 45% due to an article by Jon WIlner who is a Pac-12 writer for the San Jose Mercury News. 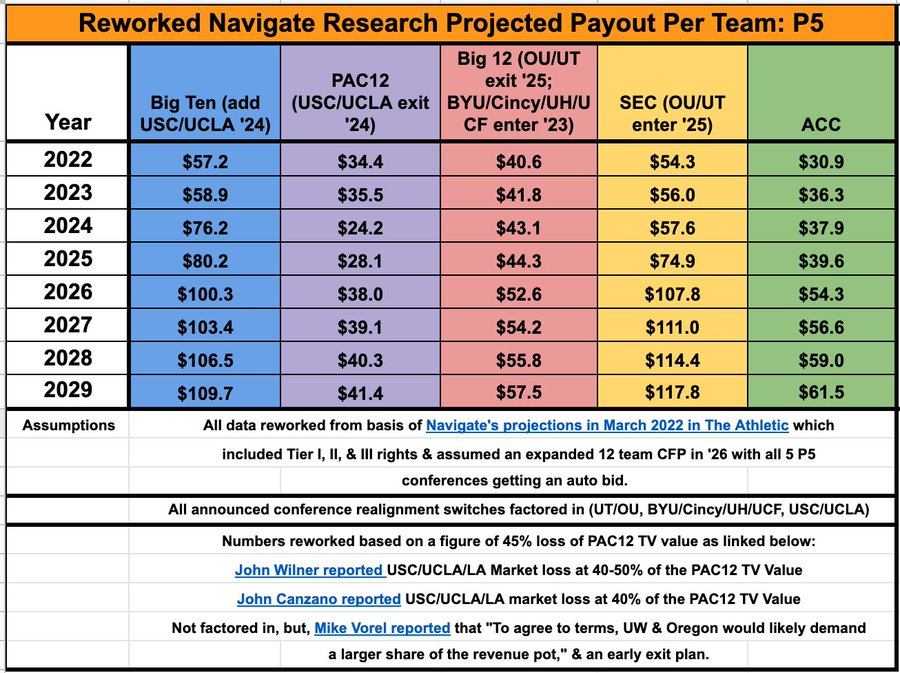 Let’s Start with the Markets

Here’s a list from John Canzano defining the DMA markets for the Pac-12 and actually GIVING the SAN DIEGO market to the Big Ten when the two LA schools bail for greener pastures! 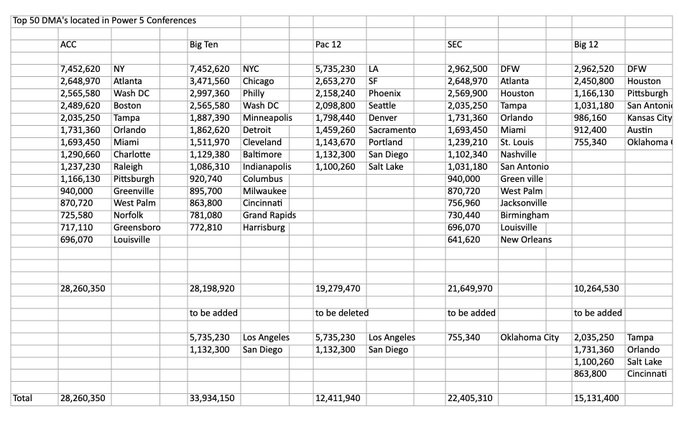 Depending on how we define the San Diego market, the potential loss in revenue per team for a new Pac-10 or Pac-11 will be anywhere from 19 to 24%. This chart also shows that the Pac-10 will not be hurt one bit by adding SDSU as the Number of TV’s per team essentially stays the same.

Then it must be the TV ratings, Right?

OK, you might think that the 40 to 50% loss in revenue might be due to the fact that USC and UCLA drew more ratings than the other Pac-12 schools. It sure doesn’t appear that way according to this article. Over half a decade ago USC was a clear ratings winner, but these days it’s Oregon that generates the largest TV ratings for the league.

A Guess on Projected Revenue 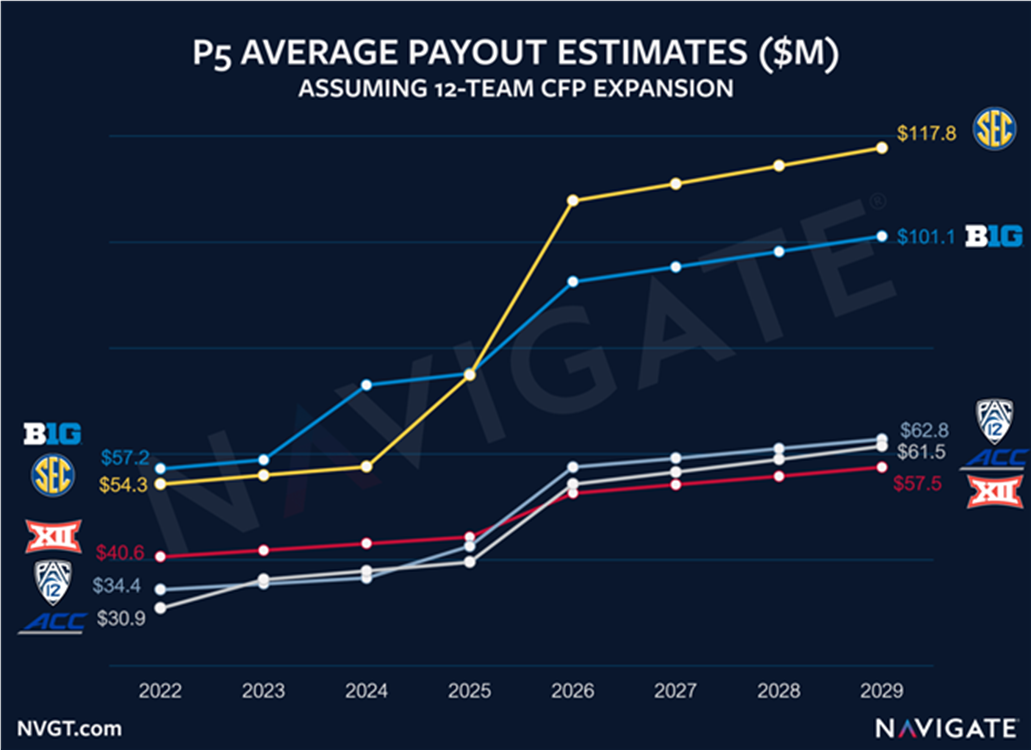 Would schools be willing to put their Olympic sports athletes through much increased travel for that small percentage difference in revenue? I’d guess not, and there must be a reason for  the four corner schools of Utah, Colorado, and Arizona schools to have not already bailed.

We’ll see where this goes in the future. For now it’s clear that the Pac-12 will still receive significant revenue and it’s also pretty clear that while SDSU might not help the per team averages, it won’t hurt it either and it WILL help the Pac keep a foothold in Southern California. Doing so might even force the great TV powers to remove San Diego from the Big Ten market, which would affect the LA school’s overall value to that conference.

An Aside: Who Decides Which Markets Belong to Whom?

One wonders, though, if the great TV powers consider San Diego part of LA’s market, then shouldn’t adding SDSU to a league allow the league to count the LA market? Probably not. These things only work against SDSU for some reason.

One also wonders if the Big 12 market numbers are a tad over represented in Joe Canzano’s article. Are Austin, the home of the Longhorns, and San Antonio (home of no Big 12 team) really Big 12 markets?

Perhaps we can answer this by looking at which teams are more popular using Google Trends. Results are in the Table below.

Note that Tampa is a different market than Orlando, and that market follows the blue-blood programs Florida and Florida State. Pittsburgh actually has its own university.

It gets even more interesting when you look at who wins the larger Big 12 markets using Google Trends. At least Kansas and Kansas State dominate their home market. Thankfully for the Big 12 they invited BYU—otherwise it would have been a clean sweep.

Note that Austin and San Antonio were absolutely dominated by Texas and Texas A&M. Those two schools dominate all Texas markets except the mighty Lubbock DMA market. Kudos to TexasTech.

SDSU compares very well to these schools, especially the four new additions. BYU and SDSU control their market at the same rate (53%), and while Cincinnati’s numbers are respectable at 44%, UCF and Houston are below 30%. It’s also very clear that calling Tampa a UCF market is wishful thinking at best. 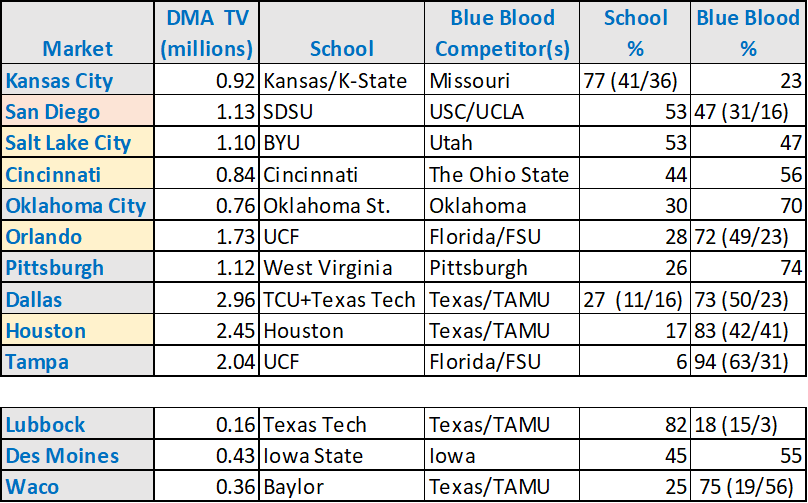 According to Google Trends, only three “New Big 12” schools dominate their market

Contrast this with the Pac-12 markets that are all dominated by actual Pac-12 teams  (with the exception of Utah listed above) because there is no real competition for them.

It very well could be that the Pac-12 is a bit under rated and the Big 12 a tad bit over rated. In the end, getting into either conference would result in more compelling games for SDSU – and that’s what it should really be about.

SDSU’s Keshawn Banks: “It’s a Prove-It Year For Me”

Kyahva Tezino: “I want to be the head coach at San Diego State”

Join the Sons of Monty Team!

The Sons of Monty Team is looking to expand! We are currently looking for creative writers, photographers, videographers, researchers, graphic designers and social media marketers. If you are interested in  joining our team, fill out the info below and we will be sure to contact you!

SDSU’s Keshawn Banks: “It’s a Prove-It Year For Me”

Kyahva Tezino: “I want to be the head coach at San Diego State”